The island of Stromboli

The island of Stromboli is an active volcano included in the Aeolian islands archipelago, collectively part of a UNESCO World Heritage site. Its altitude is 924 mts. above the sea level, and overall the island extends on an area of 12,2 km2. Not far from Stromboli is the volcanic plug of Strombolicchio, remnant of the original volcano that originated Stromboli. The island is inhabited since ancient times, evidence of that is the prehistoric village of San Vincenzo. At the present time the resident population is about 600 inhabitants.

Thanks to the extraordinary fertility of the soil, the island’s economy has been traditionally based on typical Mediterranean agricultural products, such as olives, grapes (in particular the ​malvasia​ grape), figs, tomatoes, prickly pears, and on fishing. Starting from the 30’s the island has experienced a strong emigration and a consequent depopulation. However, after Roberto Rossellini shot the movie “Stromboli, Land of God” the Aeolian islands ended up on cinema screens around the world favouring tourism, nowadays the principal driving force of the Aeolian economy. The main inhabited village is San Vincenzo, with the beaches of Scari and Ficogrande 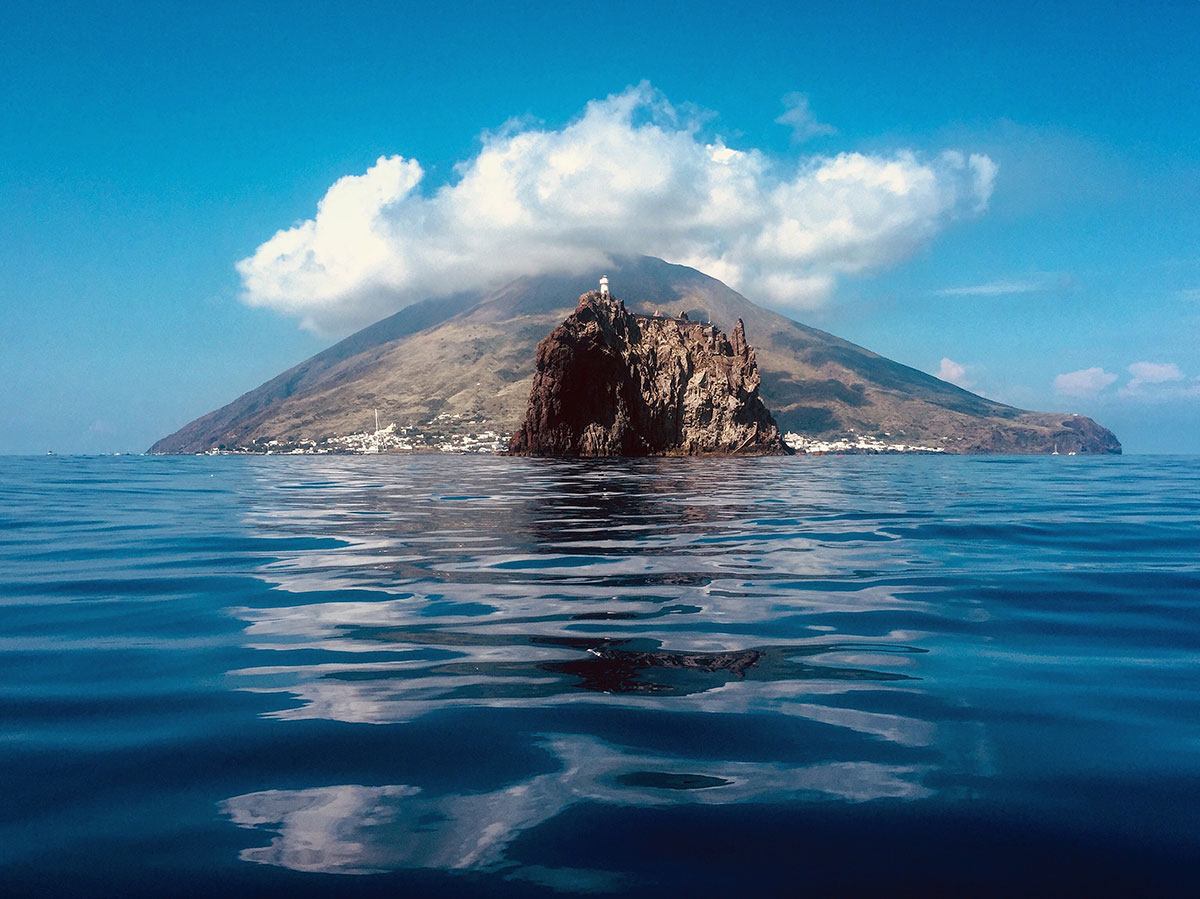 On the southwestern side of the island, beyond the Stream of Fire, lies the minuscule hamlet of Ginostra, which is reachable only from the sea. It entered the World Book of Records as the smallest port of the world, but was later equipped with a dock for large vessels. In winter barely 15 people live in Ginostra, and the village has a further characteristic: the only means of transport are donkeys, in Sicilian language “u sceccu”.

The traditional architecture of Stromboli resembles the typical Aeolian style, with dwellings usually built up in lavic stone following a modular scheme by the juxtaposition of a number of cubic elements. Very often Strombolian houses have terraces or gardens with flowers and fruit trees. The tiny streets of the village are accessible only by electric cars, scooters, and Ape three-wheelers. At night there is no public lighting, to maintain the charme of old times and to ensure the possibility of admiring the starry sky and possibly the volcanic eruptions.
Among the events in Stromboli the most deeply felt is the celebration of San Vincenzo, on the last Sunday of July, particularly in the district of Scari. There are then the processions and celebrations in honour of San Bartolomeo, patron saint of the island, on August 24. Another event that has growth very much in importance is the Fire Festival, a biennial summer event with fireshows and pyrotechnic arts celebrating fire as the central natural element in the life and culture of the island.

With regard to food, Stromboli features many typical dishes of the Sicilian tradition, especially seafood; among them we can mention maccheroni with stone-bass sauce and spaghetti with shrimp sauce or squid ink. Among second courses are the fish soup, stuffed flying squids, squid skewers, and swordfish rolls. Side dishes include caper salad, eggplant ​caponata​ and cauliflower croquettes. Evidentlythereisnoshortageofdesserts,withexcellentslushes,​cassata​and​cannoli,​ wellmatched with typical sweet wine ​Malvasia​.